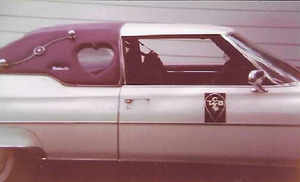 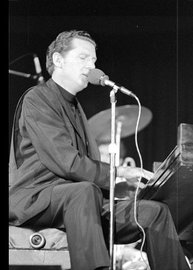 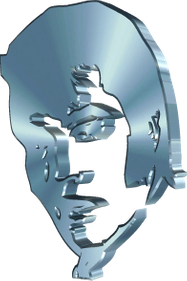 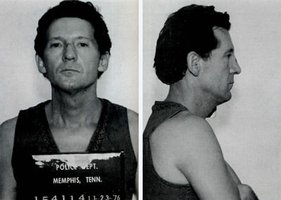 In 1972 i had a custom car and Elvis' cousin Harold was a guard at the gate. We became friends and hung out together.He told Elvis about my car and he said he wanted to see it. I drove up to the from door of Graceland and Elvis came out to see it, he thought it was cool.

In the early hours of November 22, 1976, Harold Loyd, Elvis', and the presiding guard on duty at Graceland, was greeted by an unexpected visitor, Jerry Lee Lewis. Jerry Lee, accompanied by his wife, pulled up to the mansion's front gate in his new Rolls-Royce Silver Shadow. He asked Loyd if he could see Elvis, but was told that the King was asleep. Lewis politely thanked Loyd and drove away without incident. Later that morning, at 9:30 a.m., Lewis flipped his Rolls while rounding the corner at Peterson Lake and Powell Road in Collierville.

The police report on the incident stated that the Breathalyzer test yielded negligible results, but that Lewis was obviously tanked on something and that he was charged with driving while intoxicated, reckless driving, and driving without a license. After the infraction Lewis most likely returned to his home to rest.

On November 23, 1976, less than 12 hours later, he was holding court at The Vapors, one of his favorite Memphis nightspots. For reasons that are still debated, Lewis decided to leave the Vapors at about 2:30 a.m.

Precisely 2:50 a.m., almost 24 hours later to the minute, he again pulled up to Graceland, this time in a new Lincoln Continental. The car wasn't the only thing that had changed from the night before. Lewis' manner was markedly different. He was armed, angry, and obviously inebriated -- a dangerous combination for a man mere mortals call 'Killer', He was outta his mind, man', recalls Loyd. 'He was screamin', hollerin', and cussin'.

'Get on the goddamn phone. I know you got an intercom system. Call up there and tell Elvis I wanna visit with him. Who the hell does he think he is? Tell him the Killer's here to see him'.

Loyd panicked. 'I just put my hands up in the air and said, 'Okay, okay, Jerry, just take it easy', Loyd retreated to the guard booth and picked up the house phone. One of 'the boys' answered and Loyd apprised him of the situation. Loyd was advised to call the cops and wasted no time in doing so.

Moments later Elvis himself rang down to the guard booth. Loyd recalls their conversation precisely. 'Elvis was on the line and he said, 'Wh-wh-what' -- see, he used to stutter a lot when he got upset -- 'Wh-wh-what the hell's goin' on down there, Harold?' 'I said, 'Well, Jerry Lee Lewis is sittin' in his car down here outside the gate, wavin' a derringer pistol and raisin' hell', 'Elvis said, 'Wh-wh-what's that goddamn guy want?' (I said) 'He's demanding to come up and see Elvis'. 'He said, 'Oh, I-I-I don't wanna talk to that crazy sonofabitch. Hell no, I don't wanna talk to him. I'll come down there and kill him! You call the cops, Harold', 'I told him I already did and he said, 'Good. When they get there tell 'em to lock his butt up and throw the goddamn key away. Okay? Thank you, Harold', (Elvis is said to have watched the 'whole drama on his closed-circuit monitors').

Officer Billy J. Kirkpatrick was the first to arrive on the scene. Though Lewis was still seated in his car, Kirkpatrick knew he was armed and approached with caution.

The Lincoln's sole occupant sat staring out the front window. When the police got to the open driver's side window, they found that the man was Jerry Lee Lewis, balanced on his knee was a chrome-plated, over- under style .38 caliber derringer pistol. Kirkpatrick ordered him out of the car, but Lewis would not comply', (Kirkpatrick) had to pull him outta the car', remembers Loyd.

'He told him to keep his hands on the steering wheel where he could see 'em. Jerry said he just wanted to see Elvis, but Kirkpatrick told him to shut up. Now, Jerry, he had tried to hide his pistol by puttin' it in between his knee and the door. But when Kirkpatrick opened the door, the damn gun fell out onto the floorboard (laughs).

Kirkpatrick picked up the gun, and it was cocked and loaded', Mr. Lewis was extremely unstable on his feet, his speech was slurred, and his breath smelled of alcohol. Mr. Lewis was apprised of his rights and was arrested for carrying a pistol and being drunk in a public place. The police report states that on closer inspection, Kirkpatrick noticed that the front passenger window of Lewis' car was smashed in. This accounts for the deep gash on the bridge of Lewis' nose, obvious from his mugshot. According to Kirkpatrick's report, the injury was sustained 'from broken glass resulting from attempting to jettison an empty champagne bottle thru (sic) the closed window of his '76 Lincoln', Kirkpatrick and four other officers took Lewis away immediately. But Loyd would receive another visitor before night's end. He explains', When the wrecker came down and towed Jerry's car away (at approximately 4 a.m.) they hadn't much more than gotten outta sight when another car comes flyin' up the driveway and two guys got out. I recognized one of 'em as Jerry Lee's dad.

'He was laughin', sayin', 'Ha, ha, ha, ain't this some crap, man? I just got word that they've taken my son to jail. This guy with me here, he just got me outta the Hernando jail. I just got out, and Jerry done gone ahead'. Sure enough, Elmo Lewis -- age 78, no less -- was arrested at 7:30 p.m. on the 21st for speeding and driving while intoxicated. He spent two nights in jail and failed to make his court appearance scheduled for the morning of 23rd. Like father, like son, indeed.

The RCA Records label is a unit of BMG Entertainment.

The BMG logo is a registered trademark of BMG Music.

RCA is a registered trademark of General Electric Company, USA

SUN is a registered trademark of SUN Entertainment Corporation, USA.